By Robert Bazell, NBC News
A new study finding a potential cancer risk from the artificial sweetener aspartame is so weak that Brigham and Women’s Hospital — a Harvard teaching facility — is now apologizing for promoting the research. After being asked some hard questions – and just before the report was to be released — the hospital changed its tune, issuing a statement that said:

“Upon review of the findings, the consensus of our scientific leaders is that the data is weak, and that BWH Media Relations was premature in the promotion of this work. We apologize for the time you have invested in this story.”

Read the abstract from the study below:

Objective: We prospectively evaluated whether the consumption of aspartame and sugar containing soda is associated with risk of hematopoetic cancers.

We also observed an unexpected elevated risk of NHL (RR: 1.66; 95% CI: 1.10, 2.51) with a higher consumption of regular, sugar-sweetened soda in men but not in women. In contrast, when sexes were analyzed separately with limited power, neither regular nor diet soda increased risk of leukemia but were associated with increased leukemia risk when data for men and women were combined (RR for consumption of ≥1 serving diet soda/d when the 2 cohorts were pooled: 1.42; 95% CI: 1.00, 2.02). 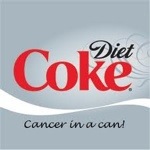 Conclusion: Although our findings preserve the possibility of a detrimental effect of a constituent of diet soda, such as aspartame, on select cancers, the inconsistent sex effects and occurrence of an apparent cancer risk in individuals who consume regular soda do not permit the ruling out of chance as an explanation.