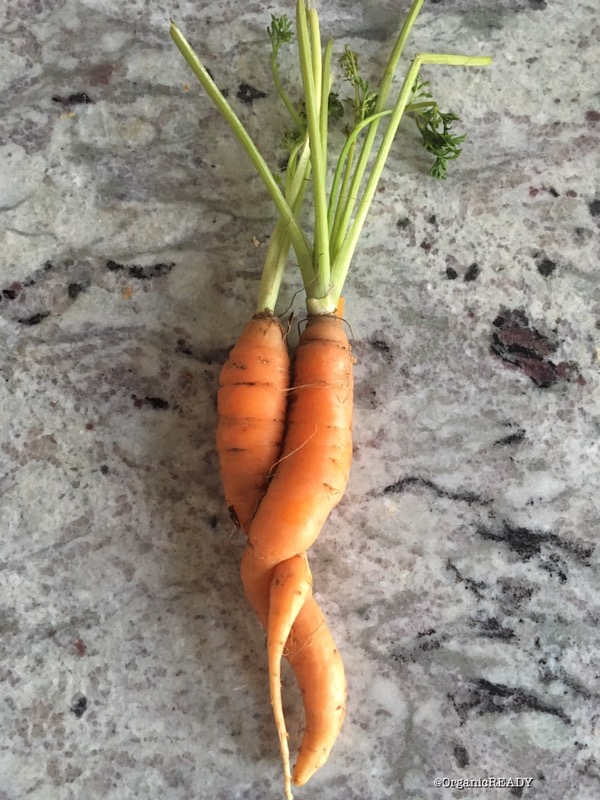 Check these carrots out. I plucked them up earlier this week from my garden. My children thought it looked hysterical.  Then my eldest son Justin asked, “what are you going to do with that?”  My response was simple, “eat it!” My youngest Lily said, “let’s juice it mommy!” So, we did just that.  I have a profound appreciation for these kinds of so-called “ugly” foods, and not because I grew these carrots, because it’s food not worth wasting. Huge problems exists in our food system today that we as consumers deal with on a daily basis. We have Big Agro over spraying pesticides and herbicides, Genetically Modifies Organisms (GMO) contaminating our foods, and so much more. One very important aspect that doesn’t get enough attention, is food waste.  In America alone, about 25% of produce is wasted before it even reaches the grocery store, and that’s just based off of looks.  The most notable new data showed that the United States waste $218 billion a year, or 1.3% of GDP, growing, processing, and transporting disposing food that is never eaten. Its food totaling 52 million tons sent to landfills annually. Those figures are disturbingly our reality. With high homelessness, starvation, and educational cut backs year after year, it’s disgraceful to know these staggering figures is due to food waste.

We live in a world that is constantly judging looks, our socioeconomic status, religion and race. You probably didn’t realize it but, food also is highly judged.  Fruits and vegetables that are grown with disfigurations and scars are usually tossed to the side by retailers and consumers. They’re not considered edible by as many as 1:7 Americans. These foods end up as waste.


There’s nothing wrong with these foods and many consumers need to understand that.  Picking out the most perfect apple or the brightest orange doesn’t make them healthier for you. They are just as nutritious and edible as their unmarred brethrens.  Thanks to some amazing people over at the @UglyFruitAndVeg Campaign, change is slowly taking shape.   They started petitions that targeted huge retailers that got amazing responses from people and organization who want to stop food waste. The support from other anti-food waste campaigners like Foodtank and EndFoodWaste.org also contributes to the awareness with programs and petitions.   Today, relailers like Whole Foods Market and Walmart are selling “ugly” fruits and vegetables. Change is taking place slowly but consumers should support by buying these ugly fruits and vegetables.   The next time you come across an apple with a dent or a conjoined carrot, buy it.  Irwin Goldman, a professor of horticulture at the University of Wisconsin-Madison said, these fruits and vegetables aren’t genetic mutants. “They’re totally edible and in some cases, quite beautiful.” Don’t discriminate against disfigured foods. Buy’em, eat’em, cook’em or even juice’em and enjoy🤗
Resources:  ReFED – Rethinking Food Waste. Ugly Fruit – The 20 Billion Pound Elephant in the Room

One thought on “Ugly, Not at All!”