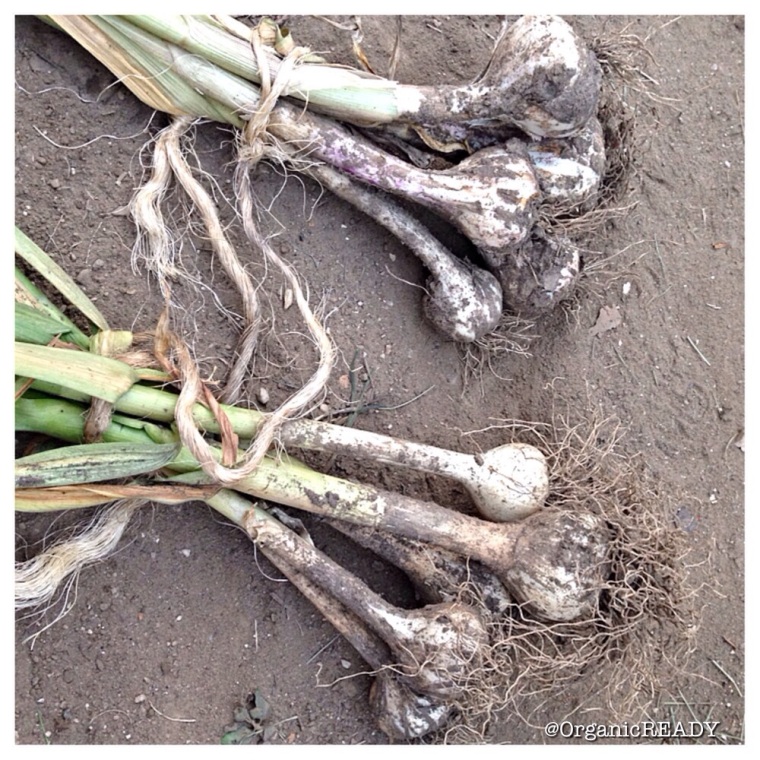 I decided to grow a small patch of garlic last year, so I planted a bunch of organic garlic seeds in October 2013. I didn’t do much but, cleared a small area in the garden and planted the seeds. I harvested my tiny crop in July and was totally blown away.

At first, I was a little apprehensive about the outcome. I planted them in 2013, and it wasn’t until the middle of July when I uprooted the first one. It was perfect! Then the others were also perfect. My children and I were extremely ecstatic. We all were jumping up and down as if we won the lottery.

Growing garlic is super easy. If I could do it, anyone can. I couldn’t believe these little suckers survived the whole cold and snowy winter. Of course, when the weather finally warmed up, all sorts of weeds were growing all around the garlic plants. It wasn’t until early May when I finally got down and dirty. Weeding is not my favorite task to do in the garden; nonetheless, it had to be done in order for the garlic to get the proper nutrients from the soil. I also added some organic compost, chicken manure, and organic liquid kelp to fertilize the soil.

Here’s a picture I took after I uprooted the weeds.

I bought the seeds from Filaree Garlic Farm. I searched online for organic seed companies, and I came across Filaree. They seemed like the perfect choice at the time. Well, based on the name alone, it sounded great. After some further research, Filaree Farm had over 25 years in the business, and their main business is organic garlic farming. They also plant and sell potatoes and shallots. I contacted Filaree about some literature on growing garlic, and they were extremely friendly and helpful.

Check these out! Not bad for my first time… 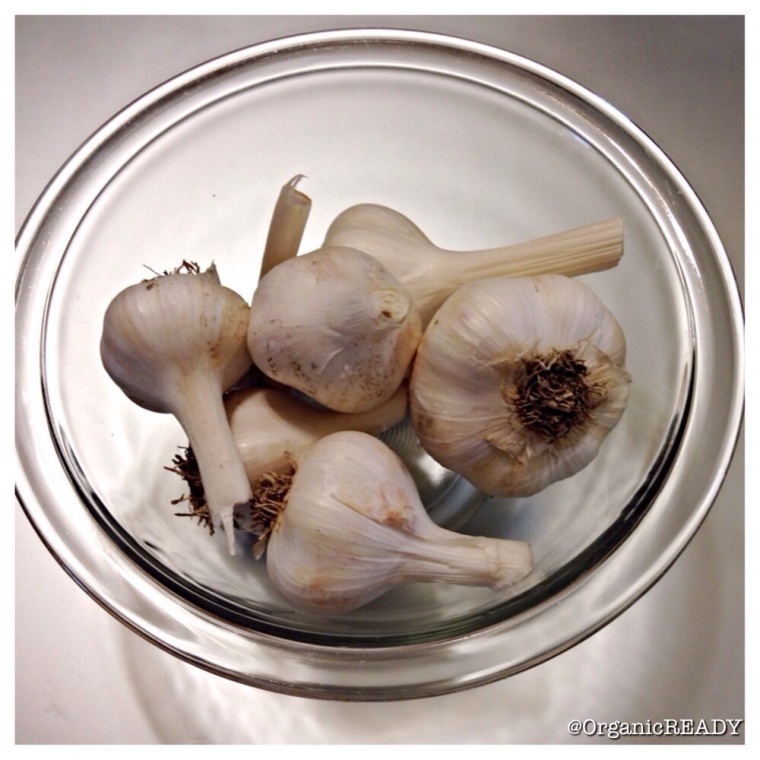 And, why you need to eat them daily?

Food as we know it could just not be the same without allium vegetables, even if many of us have no idea what those actually are. Translated from Greek allium means “garlic,” however the allium branch of vegetables also includes onions, shallots, chives, and leeks.

These vegetables would be more aptly named flavor vegetables, because their addition adds not only nutrition but also a flavor, as I said, food would just not be the same without. All allium plants are of the lily family and grow from bulbs.

Garlic:
Garlic has a scent most everyone can identify and is the most pungent of the allium vegetables. It has what many people consider an acquired taste when not cooked in to sauces. It is also well known to cause bad breathe.

However, bad breathe aside garlic has a wealth of health benefits. It has been proven to prevent cancer and heart disease, most notably by clearing the vascular walls. Garlic will help prevent the common cold and ease its symptoms, is a powerful antioxidant, acts as an antibiotic, and was even used in World War II to prevent gangrene.

Onion:
Onion is by far the most commonly used allium vegetable, and it’s no wonder being one of the oldest vegetables in existence. Onions are very high in vitamin C, and are a fabulous antiseptic and anti-inflammatory.

They are suggested to prevent cancer, as well as boost bone, cardiovascular, and gastrointestinal health. They also lower blood sugar. Most importantly they add an important flavor to almost any dish.

Shallots:
A shallot is very similar to an onion and has all the same health benefits. However, a shallot has a far less pungent taste and grows much like garlic in cloves rather than one single bulb. Shallots, on top of the many benefits of onions, can also be used to cure toothaches by cutting and warming the vegetable and placing it on the affect tooth. 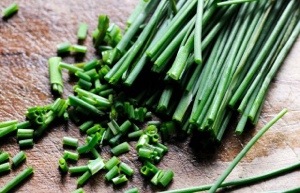 Chives:
Chives resemble grass and are in fact related to grass. They have a slight onion flavor and make great toppers or garnishes. Chives like onions and shallots pose basically the same health benefits. Chives are the mildest of the three and will not cause bad breath as onions and garlic often will.

Leeks and Scallions (Green Onion):
These two are very similar to one another and like all the other allium vegetables we’ve mentioned have the same health benefits. (Seeing a theme?) A green onion is actually just an immature onion, while a leek is a relative of garlic and onion. It is known for being slightly sweeter.

By looking at this small portion of allium vegetables, we derive that they have outstanding health benefits, are a versatile food element, and add incredible flavor and sometimes color. I don’t really care what they are, I just know they taste great!

Read these studies to learn how important they are to incorporate in our daily diet.
.
Article by: Unwirklich Vin Zant
December 11th, 2010

Garlic’s numerous beneficial cardiovascular effects are due to not only its sulfur compounds, but also to its vitamin C, vitamin B6, selenium and manganese.  Garlic is a very good source of vitamin C, the body’s primary antioxidant defender in all aqueous (water-soluble) areas, such as the bloodstream, where it protects LDL cholesterol from oxidation.

Antibacterial and Antiviral Benefits
From a medical history standpoint, the antibacterial and antiviral properties of garlic are perhaps its most legendary feature.  This allium vegetable and its constituents have been studied not only for their benefits in controlling infection by bacteria and viruses, but also infection from other microbes including yeasts/fungi and worms. (One particular disulfide in garlic, called ajoene, has been successfully used to help prevent infections with the yeast Candida albicans.)

Very recent research has shown the ability of crushed fresh garlic to help prevent infection by the bacterium Pseudomonas aeruginosa in burn patients. Also of special interest has been the ability of garlic to help in the treatment of bacterial infections that are difficult to treat due to the presence of bacteria that have become resistant to prescription antibiotics.  However, most of the research on garlic as an antibiotic has involved fresh garlic extracts or powdered garlic products rather than fresh garlic in whole food form.

Overgrowth of the bacterium Helicobacter pylori in the stomach—a key risk factor for stomach ulcer—has been another key area of interest for researchers wanting to explore garlic’s antibacterial benefits.  Results in this area, however, have been mixed and inconclusive. While garlic may not be able to alter the course of infection itself, there may still be health benefits from garlic in helping to regulate the body’s response to that infection.

Garlic
Raw garlic is an herbal “wonder drug,” as it has antibacterial, antiviral, and antifungal properties.  Garlic also contains the active ingredient allin, which hinders free radicals from spreading throughout the body.

Raw Acai
Raw acai is a purple berry that grows in the Amazon Rain forest and has been a staple cource of vitamins and nutrients for native Amazonians for centuries.  The fruit tastes like a vibrant blend of berries and chocolate, and is packed with polyphenol anitioxidants, amino acids, and essential fatty acids.

Raw Tomatoes
Raw tomatoes contain te rare and strong antioxidant lycopene, which is an essential nutrient for the body’s lymphathic system.  Tomatoes are also a great source of vitamin C, which boosts the body immune system.

Raw Citrus Fruits
Raw citrus fruits – such as grapefruit, orange, lemon and line have high concentrations of vitamin C and flavonoids, both of which bolster the body’s white blood cells and immune system.

Raw Papaya
Raw Papaya contains 313 percent of you RDA (recommended daily allowance) of vitamin C, and 67 percent of your RDA of vitamin K, which is necessary for healthy blodd circulation and the vitality of the body’s organs.

Raw Ginger Root
Ginger root has carminative properties, so it clears out the body’s intestinal track and makes it more robust.  Ginger is also a warming herb, which means it improves blood circulation, reduces inflammation, and soothes the respiratory system. Raw Avocado
Raw avocado is a potassium-rich fruit and the best-known source of vitamin E, an essential vitamin that protects against many diseases and helps maintain overall health.  Avocados also have high concentrations of glutathione, an important antioxidant that improves the body’s ability to absorb nutrients.
Contributor: Shazi Usman